Is This A Coincidence Mr JW? 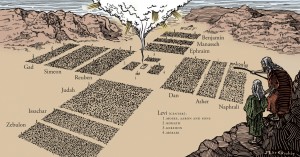 The 12 tribes of Israel outside the Tabernacle.

ACCORDING to Jehovah’s Witnesses Jesus was crucified on an upright stake and NOT a cross. (see more here)

However, unless this is the biggest coincidence ever ( and I don’t believe in them) the Bible seems to prove that their belief regarding this matter is wrong.

In Numbers chapter 2 God tells the Israelites how the 12 tribes are to assemble outside the tabernacle in the wilderness.

The tribes of Judah, Issachar and Zebulon totalling 186,400 (the largest group) would camp to the east of the tabernacle. (Numbers 2:9).

The tribes of Ephraim Manasseh and Benjamin (the smallest group) would line up to the west of the tabernacle and would total 108,100 (Numbers 2:24).

To the north of the tabernacle the tribes of Dan, Asher and Naphtali gathered and totalled 157,600 (Numbers 2:31).

In John 2:19-21 Jesus said “Destroy this temple and in three days I will raise it up”, but inspired scripture written by John says “he was speaking of the temple (tabernacle) of his body.”

Therefore isn’t it remarkable (NOT) that the layout of the tabernacle with the tribes shows a cross, Not an upright stake, with Jesus in the middle.

Any thoughts Mr or Mrs JW? Isn’t the Bible great?

One Response to Is This A Coincidence Mr JW?