Where Is the Great Crowd? 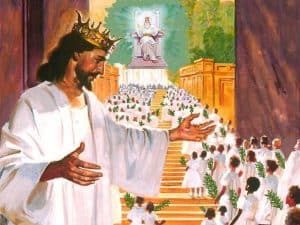 Is the Great Crowd on Earth or in Heaven?

JEHOVAH’S Witnesses teach that the 144,000 are the only people to have a future heavenly hope, leaving all other JWs members of the Great Crowd who will possess the earth after the battle of Armageddon.
But is this true and what does the Bible teach?

In the Watchtower of February 1st 1982 it informs its readers:

… the heavenly hope was held out, highlighted and stressed until about the year 1935. Then as “light flashed up” to reveal clearly the identity of the “great crowd” of Revelation 7:9, the emphasis began to be placed on the earthly hope.”

But what does scripture say? Where is the Great Crowd according to God’s Word?

Looking at verse 9 of Revelation 7 it says:

After this I looked and there before me was a Great Multitude that no one could count, from every nation, tribe and language, standing before the throne and in front of the Lamb.”

The Great Crowd are said, according to this scripture to be standing before the throne and in front of the Lamb.

From the scriptures we can see that the Great Crowd and the Lamb are very close together. Verse 11 continues;

“and (please notice little words like and; they indicate a continuation of the same description) all the angels were standing around the throne and around the elders and the four living creatures and they fell on their faces before the throne and worshipped God.”

Let us not debate this ourselves. Let us look and see what the Bible says.

Turn to Revelation 7:13-15 and read to the end of the chapter. Verse 15 says they are before the throne of God (the Great Crowd) they serve Him day and night in his temple, and he who sits on the throne will spread his tent over them.

The Bible tells us in Revelation 13:5 the Beast was given a mouth to utter proud words, and then goes on to tell us in verse 6:

“He opened his mouth to blaspheme God, and to slander his name and his DWELLING PLACE (Tabernacle or Temple), and those who live in Heaven.”

To conclude this matter read Revelation 19:1 which says:

“After this I heard what sounded like the roar of a Great Multitude in Heaven shouting.”

So, where is the Great Crowd?

The answer can only be in Heaven, in the temple before the throne.

The fact is this – the Watchtower’s theory of two classes of believers is a lie.

In Romans 3:22 we learn that God’s righteousness is through faith in Jesus – for all who believe. There is no distinction.

Yet the Watchtower teaches another gospel – a gospel of partiality.

Don’t let the Watchtower deceive you! You can be assured of your salvation and know that you have eternal life if you will receive Jesus as your Lord and Saviour.